HANOI, VIETNAM - Media OutReach - 24 October 2022 - The Vietnamese government, industries and coastal localities have expressed their strong determination to remove the IUU yellow card in the near future.

On September 20, 2022, the National Steering Committee on Illegal, Unreported and Unregulated (IUU) Fishing Prevention and Control held an online conference with the participation of all communes in 28 coastal provinces and cities across the country.

During the conference, Deputy Prime Minister Le Van Thanh, Chairman of the National Committee on Combating IUU Fishing, said that the removal of the IUU yellow card is exceptionally urgent and has great significance for the lives of fishermen and the seafood export industry as well as the reputation of the country.

He said that the leaders of the Party and the State have shown their deep interest in this issue and have attended many meetings and exchanges with high-ranking officials of the European Union (EU) and the European Commission (EC) on Vietnam's commitment, efforts and determination in the prevention and control of IUU fishing.

Thanh said: "The Government and the Prime Minister have issued directives and directions on measures to solve this problem."

The EU delegations highly appreciated Vietnam's political determination to implement the recommendations. Vietnam has participated in and performed international agreements related to anti-IUU fishing, including the Agreement on Port State Measures of the Food and Agriculture Organization of the United Nations (UN) and the United Nations Fish Stocks Agreement. The goal of the Agreement on Port State Measures, the first binding international agreement specifically targeting IUU fishing, is to prevent and eliminate IUU fishing by prohibiting IUU fishing vessels from using the port and docking their catch. Meanwhile, the United Nations Fish Stocks Agreement aims to ensure the long-term conservation and sustainable use of straddling fish stocks and highly migratory fish stocks within the framework of the United Nations Convention on the Law of the Sea.

The Deputy Prime Minister also requested the related ministries, industries and localities to effectively implement the directives of the Government and the Prime Minister, especially the Project on prevention and control of IUU fishing by 2025, which has just been promulgated by the Prime Minister to develop safe and sustainable fishing, processing and export of Vietnamese seafood.

Tran Dinh Luan, Director General of the Directorate of Fisheries under the Ministry of Agriculture and Rural Development, said that the total number of fishing vessels nationwide is more than 90,000. Vessel Monitoring Systems (VMS) have been installed on 95% of fishing vessels.

There will be more coastal provinces and cities nationwide to monitor fishing vessels around the clock, and many teams in charge of fisheries supervision at the provincial and city levels shall be established.

However, due to the infrastructure limitation and the low education of some fishermen, the IUU yellow card has not been removed yet. Mr Tien noted that fishermen sometimes fail to meet the standards in terms of fishing logs, the disbursement of investment capital for fishing ports is still late, and the installation of VMS is delayed in difficult localities with many poor fishermen.

The Government has guided that all fishing vessels with a length of 15 meters or more will be inspected before leaving the fishing port to ensure complete documents and equipment as prescribed. In addition, by that year, they must be monitored via VMS while at sea and will be inspected upon arrival at the fishing port; all inland fishery production must be inspected and supervised when loading and unloading at the fishing port, and 100% of foreign-caught seafood arriving at Vietnamese ports must be checked and monitored following the Agreement on Port State Measures of the Food and Agriculture Organization (FAO) of United Nations 2009.

At the end of 2021, Prime Minister Pham Minh Chinh presided over a remote meeting on the prevention and control of IUU fishing. He ordered the National Steering Committee to urge the ministries, industries and localities to execute the solutions effectively, decisively and synchronously.

The Ministry of National Defense was assigned to coordinate with relevant agencies, ministries and industries and the People's Committees of 28 coastal provinces and cities to enhance the inspection and close monitoring of fishing vessels' activities, especially on the seas which are not restricted clearly between Vietnam and other countries.

The Ministry of Foreign Affairs was assigned to work with relevant parties, and advise the Government on negotiating plans with countries sharing the seas which are not demarcated clearly with Vietnam to identify boundaries for lawful activities of Vietnamese fishing vessels. The Ministry is also required to collect information and evidence in the countries that arrest violating fishing vessels of Vietnam.

The Ministry of Planning and Investment was required to allocate a part of medium-term public investment capital for the 2021 - 2025 period and other capital to build and upgrade fisheries infrastructure, including fishing ports and anchorage areas and storm shelters for vessels, and develop fisheries management systems. In addition, the Ministry of Finance was requested to prioritize funding support for relevant ministries, industries and localities to perform programs and plans of IUU fishing prevention and control.

The Ministry of Transport was assigned to cooperate with the Ministry of Agriculture and Rural Development and related ministries to inspect seafood imported into Vietnam. Also, the Ministry of Labour - Invalids and Social Affairs was expected to join hands in organizing programs of vocational training and fisheries labour management in line with domestic and international labour regulations.

The US Global Policy Journal website stated that Vietnam might become a model for other Southeast Asian countries in anti-IUU fishing. Accordingly, Vietnam does not want to repeat the mistake of Thailand, which has a high percentage of fishing vessels unregistered and out of the Government's control. Vietnam also does not want to follow in the footsteps of their neighbour Cambodia which is at a dead end with a red card from the EU and unable to export fish.

A senior Vietnamese Ministry of Agriculture and Rural Development official stated: "Vietnam will never tolerate or allow any activity related to IUU fishing." 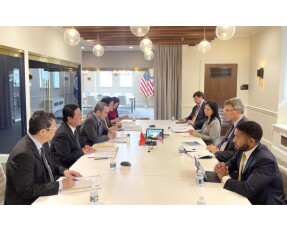