As a decentralized Web3 application of the World Cup theme, BIB Meta has made a bold attempt with its unique eco-economic model design.

Community is the most comprehensive and important core function of BIB Meta. Users can create community nodes by pledging Samsung or four-star NFT star cards and entrusting a certain amount of BIB Token as node start-up money.

When users staking the NFT of three and four stars, they can get a community certificate NFT representing ownership. The NFT represents that the user has the ownership of the star card NFT staked by the corresponding node and the node startup fund. The NFT can be traded, and at the same time, its corresponding rights and interests will be transferred.

Users who hold BIB Token can entrust the Token to the node to obtain mining revenue of BIB Token. Mining revenue comes from linear release of blocks and BIB Meta ecological revenue. The revenue that users can get will be determined by the proportion of the staked amount to the total staked amount.

On the other hand, the node owner can adjust the amount of node startup money. Smart contract allows users to upgrade 3-star nodes to 4-star nodes. BIB Token in the node lock position does not need to be migrated. Community nodes that have obtained the top 30 BIB Token numbers of users and other community nodes and have no superior nodes automatically become super community nodes.

As an important part of BIB Meta ecology, community nodes can naturally get rich benefits. The revenue sources of a community can be divided into four parts.

All the above proceeds are BIB currency-based revenue. In addition, as a community node, the node startup fund included in the node will have the right to receive dividends in cash, and the dividends in cash will be distributed as BUSD, that is, U standard.

Ecological stimulation-community node is not only a POS mechanism

Users of BIB Meta community nodes can attract more users into the ecology through network publicity, community building and other KOL-like behaviors, and staking their BIB Token to this user's node. The more the number of stakings, the greater the probability that the node will become a super node.

Once a node becomes a super node, both the node and the users staked in the node will gain more benefits. Therefore, under this mechanism, the community nodes will compete with each other, and the competition will prevent the early profitable users from "lying flat".

As far as BIB Meta is concerned, Web3 is an exploration and attempt, and its ecological model can be recycled and compete with each other, which makes the current application balanced.

With the arrival of FIFA World Cup Qatar 2022, and the deepening of market cooperation with stars and traditional Web2, the performance of BIB Meta may be worthy of attention. 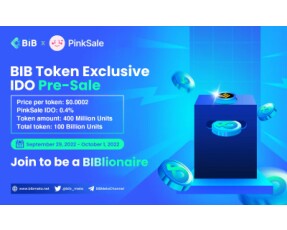