SINGAPORE - Media OutReach - 16 May 2022 - Capturing socio-cultural trends nestled in childhood experiences, MINT Museum of Toys Singapore will narrate influential stories that defined playtime in its latest exhibition, UNBOX Presents: Toy Figurines. Open to the public from 28 May to 28 November 2022, the exhibition will unveil the various toy figurines that underpinned and sparked generational shifts, from the evolution of gender norms portrayed by Barbie, G.I. Joe and Bratz to the epitome of transmedia storytelling across the Monster High ecosystem. Museum admission tickets to view this pop-up exhibition can be purchased online via their online ticketing platform.


From Barbie to Rainbow High

They add, "In the economic boom of postwar years, the pioneering Barbie let little girls break away from the domesticated worldviews of earlier paper dolls. Rapid globalisation in the 20th century required adapting the fashion doll for newer markets, which then gave rise to the queen of Japanese dress-up dolls, Licca Chan. The definition of womanhood further shifted and expanded in the age of the Internet that called upon greater representation with more inclusive toys. Here, the racially-diverse Bratz dolls replaced Barbie's single-tone and sweet personas with edgy personalities that empowered young girls"

The rapid spread of global pop culture when the Internet developed allowed many toymakers to dabble in once-taboo areas, like goth and LGBTQ+, which the team opines, laid the successful paths for Monster High and Rainbow High. The narratives of G.I. Joe, He-Man and the Masters of Universe, and M.A.S.K travelled a similar course, among many others, which the public can delve into at the upcoming exhibition.

These generational movements depicted by toys, the team adds, are vital to understanding the role toy figurines played in impacting childhood experiences within the societal peripheries of each decade, lending it a true lever in the study of history. Housing the largest collection of the most popular vintage toys in Singapore and Southeast Asia, the MINT Museum of Toys reiterates the need for society to look back and understand the journey transpired till today. With nuggets of history embedded in each toy figurine, UNBOX exhibitions such as these reach out to the inner child of the visitor, allowing them to rediscover and reflect on a past once lived. Also a creative ground for up and coming curators to explore alternative narratives, UNBOX helps to bridge the gap between toys, art and history.

About MINT Museum of Toys
MINT Museum of Toys Singapore has an ever-growing collection of 50,000 toys, the largest in Southeast Asia, carefully curated collections ranged between the years of 1840s to 1980s hailing from over 40 different countries are displayed across four levels of the museum, housed in an award-winning designed building on 26 Seah Street, Singapore. The museum also organises programmes for schools including

Learning Journeys comprising guided tours and hands-on activities, and a variety of public events held at our

GUERILLA" that celebrates Singapore's unique culture and the seasonal "UNBOX" where vintage, rare and famous collections are revealed for public display. The museum also extends its experience to the virtual world with its series of innovative and interactive digital products, such as its

Virtual Museum Tours which feature two core exhibitions in a 360-view of over 100 content-based, video and gamification touchpoints. It's most recent product is the

XperienceAR Museum, an app-guided tour of the various toys and characters with over 35 interactive 2D and 3D touchpoints. For more information, please visit: 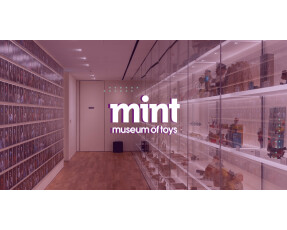