SINGAPORE - Media OutReach - 27 November 2017 - The Board of Directors of the French Group CMA CGM, a worldwide leading shipping company, met today to decide the change in governance of the Group and examine the third quarter 2017 financial results.

Jacques Saadé stated: "To prepare the future, last February 7th I appointed Rodolphe Saadé to the position of Chief Executive Officer.  His strategy has delivered very good operational and financial results.  The Group is strong.  I am very confident in its future.  That is why I have decided to entrust to Rodolphe the Chairmanship of the Group in addition to his current responsibilities as CEO. He has the full support of the Board of Directors, the management team and the 29 000 employees with whom he will pursue the development of the CMA CGM Group, to which I dedicated my entire life."

Rodolphe Saadé, Chairman and CEO of the CMA CGM Group, declared: "My father's decision is an historic one for our Group which became a key global player under his chairmanship. Jacques Saadé is both an extraordinary entrepreneur and visionary. I will pursue with determination the development of our group and strengthen its position as a leader."

2.    THIRD QUARTER 2017: CMA CGM pursues its profitable growth strategy and once again achieves the best operating margin in its sector

During the third quarter, volumes carried by CMA CGM experienced a strong growth of +11.6% in comparison to Q3 2016. During the period, CMA CGM carried close to 5 million containers, a record figure. This increase can be explained by the strong growth in volumes carried through OCEAN Alliance, on the Asia-USA and Asia-Europe routes, as well as on most of the North-South and Intraregional routes.

The increase in freight rates seen at the beginning of the year has continued through this quarter, enabling an increase of 14.4% in average revenue per container carried.

CMA CGM thus maintains its leadership within the sector in terms of profitability. This performance results from the Group's ability to leverage its size and global network to optimize both revenues and costs, despite rising fuel prices.

Highlights of the third quarter

On July 25, CMA CGM signed a concession contract for the new container terminal in Kribi in Cameroon, alongside Bolloré Transport & Logistics and the Chinese group CHEC. This 25-year contract will enable the Group to intensify trading on routes to and from Africa, whose dynamism has benefited the Group for many years.

On September 14, CMA CGM announced its partnership with Aix-Marseille French Tech, a key player in digital innovation in the metropolis of Aix Marseille. Through this partnership, CMA CGM intends to contribute to the development of the region's already intense digital ecosystem and continue its digital transformation.

Order of 9 LNG-powered containerships of 22,000 TEUs

On September 19, CMA CGM signed the order for 9 containerships of 22,000 TEUs, for which delivery will begin in 2020. CMA CGM has opted for a liquefied natural gas (LNG) propulsion system. With this innovative technological choice in the shipping industry, CMA CGM asserts its ambition to be a leader in the energy transition of the industry.

Rating upgrade, bond refinancing and strengthening of the Group's liquidity

In light of the Group's results and the improved outlook for the shipping industry, the rating agency Standard & Poor's upgraded the CMA CGM Group's rating to B+ with a stable outlook; more recently, Moody's adopted a positive outlook of its B1 rating.

On July 9, the Group raised 650 million EUR on the bond markets to refinance the NOL 2017 bond, and in anticipation, the CMA CGM 2018 bond. The Group has also negotiated a new revolving credit facility of 205 million USD, which has been increased to 285 million USD since.

In October and November, the Group issued a new bond for an amount of 750 million EUR which proceeds will be used for the early redemption of vessel secured debt and the 2019 NOL bond.

Operating performance for the full year 2017 is expected to show a strong improvement over that of 2016.

With a presence in 160 countries and through its 600 agencies network, the Group employs 29,000 people worldwide, including 2,400 in its headquarters in Marseilles. 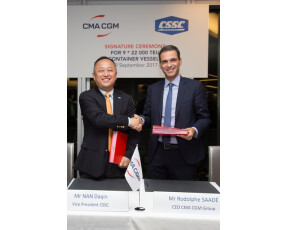 CMA CGM chooses the Chinese shipyards CSSC to build its 9 vessels of 22,000 TEU, the largest containerships