11 January 2014--Media OutReach--SINGAPORE-- The National University of Singapore (NUS) Business School's staff, students, alumni and general public have come together to give back to the community in Bizad Charity Run 2014, giving a welcome boost to financially-strapped students and adopted charities. 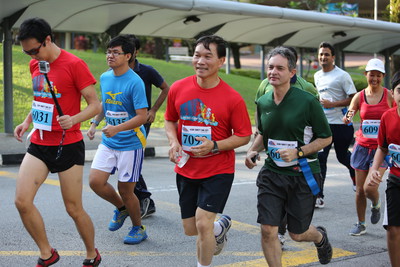 Organised by the NUS Business School Alumni Association and NUS Bizad Club, the annual Run is into its fourth edition this year and attracted more than 1,000 participants. The event is aimed at bringing together all stakeholders of the School to raise funds for those in need, while promoting the spirit of giving back to society.

This year, some S$130,000 was raised for student bursaries at NUS Business School and two other beneficiaries - Camp Vision, which reaches out to underprivileged and at-risk youths in Singapore, and women's shelter Casa Raudha Women Home.

"We chose Camp Vision and Casa Raudha Women Home as this year's beneficiaries as we believe that women and youth have great potential in motivating and driving change," said Ms Joey Gan, NUS Business School alumna and Chair of Bizad Charity Run 2014. "Any positive differences made in their lives will have direct multiplier effects in impacting their loved ones and the people around them", she added.

Participants of this year's event ran in either the 10-kilometre competition or five-kilometre Fun Run, both of which took runners through NUS' Kent Ridge Campus. The Fun Run also included, for the first time, two game zones that helped participants appreciate the value of life, in line with Camp Vision's mission of empowering youths to be leaders of their lives.

NUS Business School alumnus and Guest of Honour, Mr Yam Ah Mee, who is also Managing Director of Sembcorp Design & Construction and former Chief Executive Director of the People's Association, ran a five-kilometre route. The oldest participant, who turns 84 this month, ran 10 kilometres, while the youngest were two nine-year-olds who took part in the five-kilometre Fun Run.

Remarked Mr Simon Phua, President of the NUS Business School Alumni Association: "This annual flagship event of NUS Business School provides a good platform for alumni to do their bit for their fellow students and the community. We are proud of our past record and hope to keep this tradition of giving back going and growing".