HONG KONG SAR - Media OutReach - 23 November 2021 - Aide et Action, the largest international French-based association for development through education, calls for ambassadors from corporates, philanthropists and enthusiasts of global education in Hong Kong to be part of "Education for Women Now", its first global philanthropic campaign, with the mission to ensure that an additional 3 million women and girls in Africa, Asia and Europe can unlock their potential and have access to quality education by 2025.

The United Nations has made education a priority. In its Agenda 2030, Sustainable Development Goal (SDG) 4 calls for "inclusive and equitable quality education" and "lifelong learning opportunities" for all and SDG 5 aims to "achieve gender equality and empower all women and girls". In a recent report titled Reimagining our futures together: A new social contract for education released by UNESCO, a cross-section of stakeholders in education need to work together to reform education.

Women and girls are half of the world's population and half of its potential. UNESCO has warned that most of the world's 773 million illiterate adults are women and twice as many girls as boys still will never start school. It's a huge challenge for governments, associations and non-government organisations (NGOs) to close the gender gap in education and the pandemic makes the situation worse. According to UNESCO, more than 11 million girls may never come back to school and might be forced to join the ranks of 130 million girls who were already out of school before COVID-19.

Women and girls are one of the most vulnerable groups during the pandemic. Aide et Action has transformed the lives of the most vulnerable and marginalized groups in need for the past four decades. With support of more than 51,000 sponsors and donors, the association has footprints in 19 countries including some from Southeast Asia such as Cambodia, Vietnam and Lao People's Democratic Republic. In 2020, Aide et Action supported nearly 3 million people worldwide.

In Lao People's Democratic Republic, before the pandemic, 9% of females were married by the age of 15, while 35.4% were married by 18, according to global partnership Girls Not Brides. This is significantly higher than the global average of 20% and may increase as the COVID-19 crisis continues. These gender dynamics are reflected in the education system where females are more than twice as likely to be unschooled than males, with 21% of adult females reported in the government's census to have no educational attainment compared with 10% of adult males.

In view of such imbalanced gender dynamics, Aide et Action piloted a project - with the support of the British Embassy - on women empowerment through entrepreneurship training. The project started from 22 participants in two villages in Vientiane province home to primarily Hmong and Khmu ethnicities which demonstrate strong traditional gender role divisions and educational disadvantages.

Scaling up and scaling out

Now, with the support of the L'Oréal Fund for Women, Aide et Action is taking the lessons learnt from its pilot and building on its success, scaling up to reach 860 participants over the next four years. From training on how to apply for a job to how to build a start-up, its goal is to improve the social, behavioural, and entrepreneurship skills of ethnic minority women in Odomxay Province.

What started as a small pilot project in two villages has now grown to represent something much larger for some of the communities' key figures – the realisation that more options can be created for young women other than child marriage, agriculture and unpaid domestic labour, and that such options may stand to benefit whole communities.

Early this year, Aide et Action has announced the launch of "Education for Women Now", its first global philanthropic campaign with the mission to ensure that an additional 3 million women and girls in Africa, Asia and Europe can unlock their potential and have access to quality education by 2025.

Co-chaired by Aïcha Bah Diallo, International President of Aide et Action, also the former Guinea Minister of Education and the former UNESCO senior education leader and, later, special advisor to the Director General, and Denise Epoté, a leading figure of French and African television, now head of Africa department at TV5 Monde (a renowned French television network) the campaign committee ​​is looking for ambassadors from corporates, philanthropists and enthusiasts of global education to be part of this movement.

"Nelson Mandela referred to Education as the most powerful weapon to change the world. Education is a weapon of mass construction. Let's hand it to girls and women, because they are the ones who will change the world," says Denise Epoté, Campaign Committee Chair, Director of TV5World, Africa. 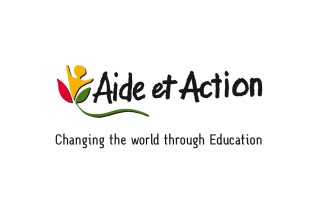 Aide et Action is an international association for development through education. Since 1981, we have been ensuring access to quality education for the most vulnerable and marginalized populations, especially children, girls and women, so that they can control their own development and contribute to a more peaceful and sustainable world. We promote lifelong learning because access to quality education helps to fight poverty and disease, limit climate change and build peace in a sustainable world. We therefore pay particular attention to early childhood care and education, access to quality education at primary and secondary levels, and vocational training and social inclusion. Based on the values of dignity, inclusion and integrity, as well as on the principles of transparency, accountability and solidarity, and thanks to the support of more than 51,000 sponsors and donors, we are currently running 85 projects in 19 countries in Africa, Asia, Europe for more than 2.9 million children, young people and adults.