HONG KONG SAR - Media OutReach - 17 November 2021 - The James Dyson Award has now given nearly £1m in prize money to over 250 promising inventions from young engineers and scientists in 28 countries around the world. In 2021, the Award received a record number of entries worldwide and Sir James Dyson chose three global winners for the first time, each receiving £30,000 in prize money to support the next stages of their inventions.

Commenting on this year's competition, Sir James Dyson said, "I enjoy seeing the enthusiasm with which young people tackle the world's problems using good design, engineering and science. So promising were this year's entries that we've awarded a third prize, focused on medical invention. Commercialising an idea is very hard – I hope that the awareness that the Award drives, as well as the financial support it provides, will give these ideas a springboard to success."

This year's International winner of the James Dyson Award was inspired by one of the inventors', Kelu, father's diagnosis of glaucoma. After witnessing his discomfort and multiple hospital visits, she realised there is a global need for a less invasive and more accessible method for Intraocular Pressure (IOP) monitoring.

Glaucoma is the second leading cause of blindness worldwide[1], and it is also the leading cause of registered, permanent blindness in Hong Kong (23%)[2]. Because it is largely symptom-free, it's also known as the "silent thief of sight"[3]. There is no cure but, if diagnosed and treated early, blindness can be prevented.

Today, regular IOP monitoring is a critical tool in helping clinicians determine long-term treatment plans and goals. This is achieved through the Goldmann Applanation Tonometry – regarded as the gold standard for the measurement of IOP. There is a demand for safe, accurate, low-cost, at-home IOP measurement devices to better improve the patient experience.

After creating a profile in the App, the user wears the HOPES glove with the sensor placed at the fingertip, pressing this against the centre of the eyelid. The fingertip employs a unique sensor architecture that captures dynamic pressure information of the user's eye with sub-millisecond precision. The captured signals are processed by machine learning algorithms to continuously and accurately compute users' IOP.

Data is transmitted via Bluetooth to paired devices or uploaded to the Cloud to be accessed remotely by clinicians. The App prompts users with easy-to-read measurement history and direct links to healthcare systems, allowing them to seek medical help to minimise future symptoms.

The team plan to collaborate with clinicians at the National University Hospital to collect and analyse patients' eye pressure data to train the device's machine learning mode. At the same time, they are working on optimising HOPES' performance, and improving its design.

Plastic is a lightweight, safe and readily available material which can be used to make long-lasting, durable products. It has a bad reputation because it is often not thought to be recyclable and so ends up in landfill, or worse on the beach or in our oceans. However, with the right technologies plastics can be widely recycled successfully at end of life and transformed into new products, which themselves are long-lasting and durable.

The challenge is identifying the plastic so that it can be recycled in the correct way, rather than sent to landfill. The technology exists but is expensive and rare. With greater availability of plastic identification much more plastic can be recycled and therefore used more effectively.

The Plastic Scanner, invented by Industrial and Product Design graduate Jerry De Vos from the Netherlands, is this year's Sustainability winner. Plastic Scanner is a handheld device that when held against plastic will tell the user what materials it's made from. It uses near-infrared spectroscopy, a technology that can categorise more than 75% of plastics.

Jerry is a member of Precious Plastic, an organisation that aims to reduce plastic waste. Through his work for the organisation he has witnessed the negative impact of plastic pollution first-hand and the bottlenecks caused when plastic is not identified and sorted in the recycling process. Around the world, much of this process is done by hand which takes time and is prone to error. Jerry has seen successful technology used in large factories in the Netherlands where infrared reflections assist with the sorting. This is a vital step for ensuring it is recycled properly. Jerry's mission has been to make this technology available for everyone around the world so they can recycle better.

The Plastic Scanner uses near-infrared spectroscopy to detect types of plastic – a new and low-cost approach to traditional infrared spectroscopy. The Scanner is also uses open source GPL-v3 license, so anyone can assemble the breakout board and embed the electronics into a handheld device. Open source welcomes feedback and improvements from experts, so the project will continuously improve as more people recycle plastic around the world.

Jerry learnt that much plastic entering our oceans comes from low and middle-income countries. It is his mission to support recycling initiatives in these nations with the way he designed the low-cost and ease of use of the Plastic Scanner. During development, Jerry interviewed recyclers from India, Indonesia, Kenya and Curacao to ensure his model was suitable for end users.

Jerry has gathered a team of friends specialising in embedded systems and machine learning to support his creation of new prototypes and pilot the Scanner in both industry and low resource contexts. Long-term his goal is to make the project sustain itself, with DIY versions of the Scanner, whilst enriching Open-source documentation to make it easier for others to get involved and contribute to his mission.

Knife crime is an issue in many countries around the world and last year, with rates of knife crime on the rise in almost all continents, particularly in countries with strict gun laws. In England and Wales alone, there were around 46,000 offences involving a knife or sharp instrument, which is the highest number of offences since the year ending March 2011[4].

The average wait time for an ambulance in the UK is currently just over eight minutes, while the target response time is 12 minutes for emergency ambulance calls in Hong Kong[5], yet it can only take five minutes for someone to bleed to death[6][7].

The REACT device (which stands for Rapid Emergency Actuating Tamponade) aims to reduce catastrophic blood loss from a knife wound. The current advice for treating stab wounds is to never remove the knife object from the wound if it is still in place[8]. This is because the object is applying internal pressure to the wound site whilst also filling the cavity and preventing internal bleeding. Joseph's concept is based on the same principle, the implantable medical-grade silicone balloon tamponade would be inserted into the wound tract by a first responder. The actuator device is connected to the tamponade valve, and the user selects the wound location on the device interface. Squeezing the trigger on the actuator starts the automated inflation sequence, and the tamponade is inflated to a defined pressure based on the wound location to try and stem the bleeding.

During the early research and development phases, Joseph discovered that current wound management techniques like wound packing are sometimes used by paramedics to prevent bleeding from stab wounds[9]. This process involves tightly packing a wound with gauze, which will help to apply pressure internally to the site. According to Joseph, the process can be slow, technical, and extremely painful to the victim, but has in many cases proven to be successful in quickly stopping bleeding from knife wounds.

Despite this, the technique may not be suitable for wounds in cavities like the abdomen, which is the most common area for knife wounds to appear following a knife attack[10]. During his prototyping, Joseph found that the simple application and automated inflation procedure of the REACT system could be a more effective method for first responders compared to traditional methods. He claims his prototype Tamponade could potentially be in place and stopping haemorrhage in under a minute, which Joseph estimates could save hundreds of lives a year.

Winning a global James Dyson Award prize will inject a further £30,000 into Joseph's project. He aims to commercialise his invention in the coming years, using the Award money for further research and official medical testing into how the REACT invention can become a global solution to knife wounds and hopefully save lives.

Invented by 27-year-old Carvey Ehren Maigue, AuREUS is a new material, made from waste crop, which converts UV light into renewable energy. The Sustainability prize was newly created in 2020.

MarinaTex is a home compostable material designed as an alternative to single-use plastic films. The material is comprised of waste material from the fishing industry and sustainable algae.

O-Wind Turbine is an omnidirectional wind turbine that can capture wind travelling in any direction, unlike conventional turbines. This allows it to be used in urban environments where wind flow is multi-directional.

The sKan is a low cost and non-invasive melanoma detection device invented by a team of medical and bioengineering undergraduates from McMaster University, Canada. The team are currently using the prize money to refine their design to ensure it passes the US Food and Drug Administration standards.

EcoHelmet is a foldable, paper bike helmet for bike shares. It uses a honeycomb configuration to protect the head from impact and folds completely flat when not in use. It is currently in product development stages.

[8] Hammett, E. (2020). How to help someone who has been stabbed or is seriously bleeding. [online] First Aid for Life. Available at: https://firstaidforlife.org.uk/knife-crime-serious-bleeding/

[9] Hammett, E. (2020). How to help someone who has been stabbed or is seriously bleeding. [online] First Aid for Life. Available at: https://firstaidforlife.org.uk/knife-crime-serious-bleeding/ 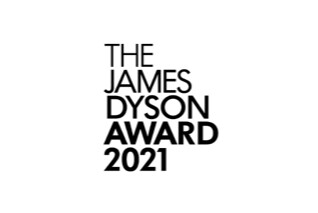 The brief. Design something that solves a problem. This problem may be a frustration that we all face in daily life, or a global issue. The important thing is that the solution is effective and demonstrates considered design thinking. Unlike other competitions, participants are given full autonomy over their intellectual property.

The process. Entries are judged first at the national level by a panel of external judges, before progressing to the international stage. A panel of Dyson engineers then select an international shortlist of 20 entries. The top 20 projects are then reviewed by Sir James Dyson who selects his global winners.

How to enter. Candidates enter through an online application form via the James Dyson Award website. Entries open again on 16 March 2022. Entrants should concisely explain what their invention is, how it works, and their development process. The best entries solve a real problem, are clearly explained, show iterative development, provide evidence of physical prototyping and have supporting imagery and a video.