HONG KONG, CHINA - Media OutReach - 10 January 2019 - Memorigin, the international Hong Kong tourbillon watch brand, brings together Oriental craftsmanship and world class Western watchmaking skills to present state-of-art tourbillons. As getting more and more popular in the foreign markets, Mr. William Shum, the CEO of Memorigin, and Mr. Nakagawa, the Japan director of Memorigin, were invited by Mr. Fukami Toshu, the founder of HANDA Watch World and artist, to attend an event in Tokyo and have dinner with the international artist Mr. Nicolas Cage.

William Shum presented Memorigin's Star Wars Series "Darth Vader" Tourbillon watch to Nicolas Cage, and introduced Memorigin to him. Nicolas Cage put the watch on immediately and said "I have to show this watch to the director of "Star Wars" Mr. George Lucas!"

The Star Wars Series was designed by Mr. Mark Lui, the famous musician and designer in Hong Kong. The appearance and story of each Star Wars character were very attractive and the story of universe which was created by George Lucas is boundlessly. Among all the characters in the movies, "Darth Vader" is the greatest charming. From a great hero to a devil seduced by the dark forces. He is always wearing a mask to seal the heart of justice completely. His inner world is elusive which creates the role of "Darth Vader", which captures the hearts of all Star Wars fans. In order to gives rise to a lively image of "Darth Vader", Mark Lui designed the tourbillon watch in dark tone. Through the skeleton of the mask of "Darth Vader", fans can enjoy the Tourbillon movement. The complex "heart" of the "Darth Vader" was hidden under the thick armor and the Stainless-steel strap. In addition to the design of the dial, Mark Lui also took care of the demands of the Star Wars fans in every detail. The TIE Fighter was used as the hour hand and the red laser sword of "Darth Vader" was used as the minute hand. It stimulates Star Wars fans' emotion when they wear the wrist watch.

Memorigin is the first Hong Kong brand which only produces Tourbillon, which uses its in-house movement with its production process strictly controlled so that craftsmanship and quality are sanctioned by international professionals. In additions, Memorigin has a unique word carving technology: words can be engraved on the movement and can be preserved forever that the watch becomes unique and memorable. 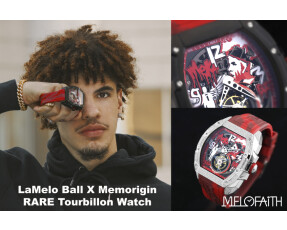