Microsoft launches virtual datacenter tour to enable everyone to experience the foundation of work, life and play

SINGAPORE - Media OutReach - 21 April 2021 - As Asia moves out of the pandemic, cloud is not only a critical foundation for business resilience but will also be a key driver of the region's next wave of economic growth. Recent research by IDC, shows that Microsoft's most recent datacenter expansions in Malaysia, Indonesia, and Taiwan alone, in partnership with its ecosystem, are set to generate more than $21 billion in new revenues and will create 100,000 new jobs in the next four years[1]. Microsoft is also unveiling an immersive virtual datacenter tour to empower every individual to experience the foundation for today's work, life, and play – the Microsoft Cloud.

Over the past year, we have seen digital transformation on an unprecedented scale. Entire industries have been reimagined, people have connected differently to work, live, learn and be entertained, resulting in real structural change that will outlast the COVID-19 pandemic. In response, Microsoft has accelerated the growth of its cloud datacenter footprint in Asia, expanding from seven to eleven markets to better support and co-innovate with customers and partners. As part of this expansion, the company announced the addition of cloud regions to four new markets across Asia - Malaysia, Indonesia, Taiwan and New Zealand.  This expansion was combined with additional cloud infrastructure investments, empowering customers with faster access to the cloud and allowing for in-country data residency.

"There is no doubt that during the past year we have seen the acceleration of digital transformation efforts across all industries," explains Ahmed Mazhari, President, Microsoft Asia. "Asia now accounts for sixty percent[2] of the world's growth and is leading the global recovery with the digitalization of business models and economies. Cloud will continue to be a core foundation empowering the realization of Asia's ambitions, enabling co-innovation across industries, government and community, to drive inclusive societal progress."

In Malaysia, Celcom, a leading telecommunications company is embracing Microsoft Cloud in its pursuit towards becoming digital economy powerhouse in the region. "We highly applaud Microsoft's plans to establish its first datacenter region in Malaysia, providing access to a secure, scalable, highly available, resilient and sustainable cloud services for the government, and across multiple industry verticals. As the anchor telco tenant, we look forward to bringing the benefit of this datacenter to our customers and partners" said Idham Nawawi, Chief Executive Officer of Celcom.

In healthcare, Shobana Kamineni, Executive Vice Chairperson, Apollo Hospitals, India's leading integrated healthcare services provider which is offering round-the-clock virtual consultations with just 15 minutes notice commented: "Ultimately, all our transformation efforts center around providing seamless and secure healthcare experiences for our patients. With a trusted cloud infrastructure, we can not only improve patient engagements, but also have access to intelligent health insights for better patient outcomes. We are excited to see how this will continue to evolve, and how we can continuously combine our network and capabilities with Microsoft's technological expertise as we look toward the future of healthcare."

According to IDC, Microsoft, along with its ecosystem of partners and cloud-using customers, are expected to generate over $21 billion in new revenue and to create more than 110,000 jobs, including nearly 19,900 new skilled IT jobs, in Malaysia, Indonesia and Taiwan during the next four years[3].

Microsoft (Nasdaq "MSFT" @microsoft) enables digital transformation for the era of an intelligent cloud and an intelligent edge. Its mission is to empower every person and every organization on the planet to achieve more. 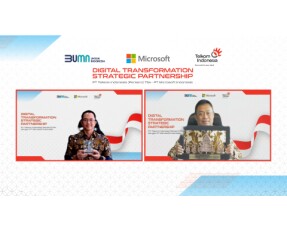