HONG KONG, CHINA - Media OutReach - Sep 15, 2017 - Tai Hang was originally a small Hakka village, home to farmers and fishermen. The village was hit by a deadly plague in the late 19th century, which killed many residents. According to folklore, the Buddha told a village elder to perform the Fire Dragon Dance and burn firecrackers during the Mid-Autumn Festival to drive the plague away. The villagers followed the order, and the sulphur from the firecrackers and incense reportedly drove the plague away. It then became an annual event to pray for good health and prosperity for the village. It will be held on 3-6 October this year.

Posing in a bow stance with his arms reaching forward, Chan Tak-fai demonstrates the moves of the Fire Dragon Dance to a group of "Tai-Hangers" in an outdoor car park. The 70-year-old is in high spirits, demonstrating the posture and the steps in detail, hoping the young residents can remember the essential moves, as they are his hope for keeping the Hong Kong tradition alive.

"People who grew up in Tai Hang understand that taking part in the Fire Dragon Dance is an honour," Chan says. "If you haven't taken part in it, you are not a real Tai-Hanger."

Chan takes pride in his responsibility for passing on the living heritage of the dance. Since 1880, the unique tradition has been kept alive thanks to the efforts of generations of Tai Hang residents. It was named one of the key items in Hong Kong's Intangible Cultural Heritage list and was inscribed in the national list in 2011.

Today, Tai Hang is no longer a village. It is a hip neighbourhood, home to trendy restaurants and posh apartments. Many of the original inhabitants have left. But the tradition of the Fire Dragon Dance remains, and many indigenous Tai Hang people return to their old neighbourhood on the special days to take part in or watch the dance.

One of them is 21-year-old Alan Fok Chun-fung. As a child, he was mesmerised by the beauty of the 220-feet long "dragon" made of bamboo, straw and tens of thousands of incense sticks that lit up the dark streets of Tai Hang.

"I lived upstairs, so I had a view of the Fire Dragon from above," says Fok, recalling his childhood memories of Wun Sha Street, one of the key dance locations.

"I was fascinated by the beauty and movement of the Fire Dragon. Then my mother suggested I take part in it."

Fok first participated in the dance at the age of 14. The young generation's passion for the dance has moved Pang Man-kan, a shy 81-year-old elder, who has been involved in the dance since he was a teenager and became a consultant when he retired.

"It's great to see so many young people taking part. Even Westerners living here are passionate about it, and we welcome them all," said Pang.

Controlling the Fire Dragon is no laughing matter. It is made up of 32 segments, which weigh over 100 kilograms -- the head alone weighs 48 kilograms. But the weight is not enough to keep young people like Fok away. While the elders of Tai Hang are concerned about passing on the tradition, the young generation thinks differently.

"The history and tradition matter, but to us the most important thing is the sense of belonging to this local community," Fok says. The Tai Hang Fire Dragon Dance is an indispensable part of the Mid-Autumn Festival celebrations in Hong Kong. 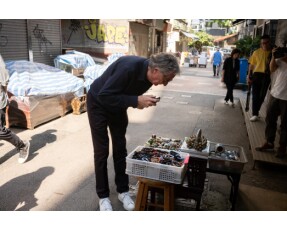 Travel through the lens of Paul Smith: Legendary ways to capture the authenticity of Hong Kong